Check out Part 2 of this PushPress Client Spotlight! Shelly Head talks about recovery after her breast cancer diagnosis with Barbells for Boobs RAD program. 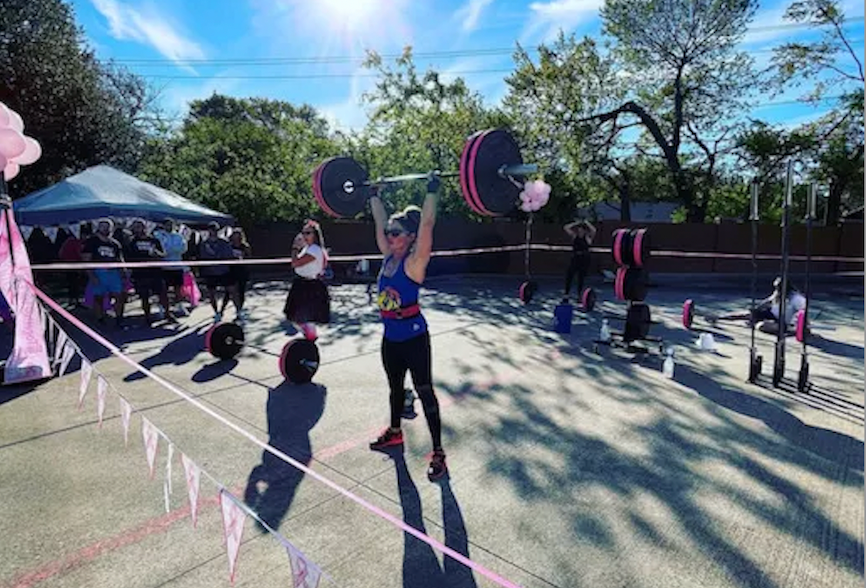 TL;DR
Check out Part 2 of this PushPress Client Spotlight! Shelly Head talks about recovery after her breast cancer diagnosis with Barbells for Boobs RAD program.

After being diagnosed with breast cancer in the summer of 2021, Shelly Head underwent a double mastectomy. When she was discharged from the hospital, doctors didn’t give her much rehabilitation guidance.

So she took matters into her own hands and did her research. She came across some support groups online for women battling, and recovering from, breast cancer.

She started asking for tips about getting back to doing clean and jerks and snatches. “Nobody knew what I was talking about,” explained Head, the owner of Grapevine CrossFit, a PushPress gym in Texas.

While Head’s goal was “getting back to fitness the quickest,” that wasn’t the case for other women in the group. Some were aiming to simply lift their hand above their head again. It was just a difference in fitness levels.

Even before the breast cancer diagnosis, Head was used to people not really understanding where she was coming from.

In the aftermath of her double mastectomy, doctors gave Head two options: Implants or expanders. Because she had a lower body fat percentage, she wasn’t a candidate for a flap procedure, where tissue is taken from elsewhere on the body to build breasts.

“But I don’t want breast implants,” Head told her doctor.

Having breasts had never really been a part of Head’s identity. She explained that it wasn’t as important to her to rebuild her breasts as it is to many other women who have mastectomies.

So, once again, she did her own research. She came across a procedure called aesthetic flap closure, basically avoiding any kind of reconstruction. Doctors would simply close her up and making it look as nice as possible. This was the route she chose to go.

Head’s recovery journey finally got a whole lot easier when she discovered the Barbells for Boobs RAD (resources after diagnosis) program.

Barbells for Boobs is a non-profit founded by CrossFit athlete Zionna Handson in 2009. The charity has raised more than $20 million for breast cancer. This is largely through gyms hosting Grace—30 clean and jerks for time—fundraising events. The year before being diagnosed with breast cancer, Head raised $6,500 for the cause. She went on to raise another $36,000 in 2021.

The moment Head discovered the women in RAD, she knew she had found the right support group for her.

“I was like, ‘OK, These are my people. They know what I want to do and what I want to get back to.’ It’s cool to have all like minded people together with the same diagnosis,” she said.

Since then, Head has attended weekly Zoom calls where the women in the group talk about their various struggles and successes.

“Sometimes they’re happy and fun. Sometimes they’re pretty deep and people are crying,” she said. But she always leaves feeling understood and supported, something she didn’t experience through her breast cancer journey prior to joining RAD.

“It has been - I don’t even know how to explain it - just such a blessing to have them, all the athletes who are going through the same thing,” added.

The Road to Recovery Continues

Today, cancer-free, Head is back at the gym working out. She isn’t where she used to be fitness-wise, which she admits has been a tough pill to swallow.

She continued, “My priorities are definitely not the same. I don’t have two hours to spend in the gym like I used, but I don’t have to. I’d like to get back a little bit further to where I used to be, but I know if I don’t, that’s okay.”

Making that mindset shift hasn’t been easy, Head explained. But having the RAD community in her corner has made it a whole lot easier. And despite being cancer-free today, she thinks RAD will continue to be part of her life, for life.

“It will probably get better as time goes on, but there’s always fear, there are always struggles with (breast cancer). It doesn’t ever go fully away, so it’s one of those things where I think (being part of RAD) will always be there,” she said.