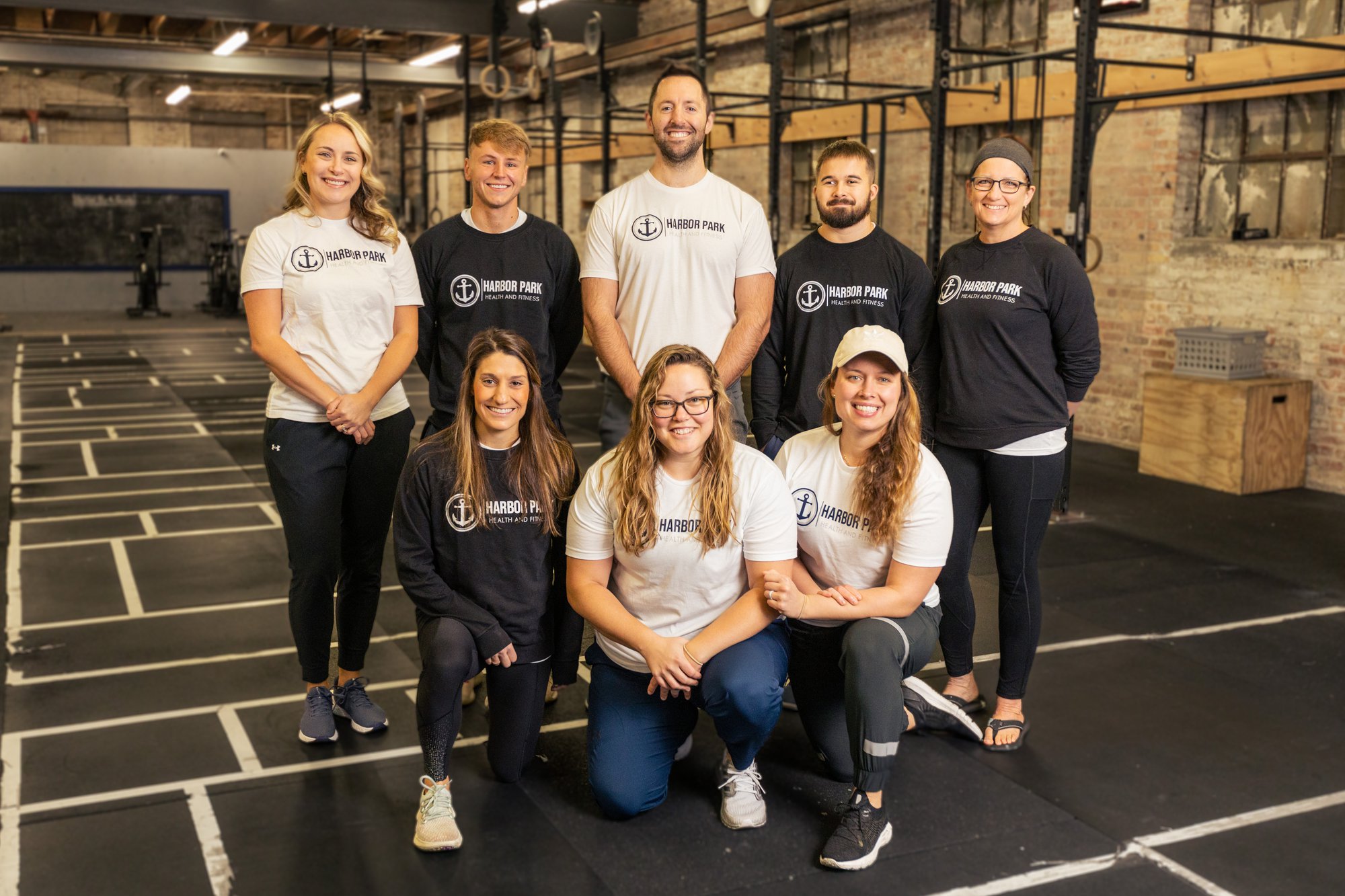 While some CrossFit affiliate owners shy away from increasing prices, Jason Yule decided to “think outside the box.” Yule, the owner of Harbor Park Health and Fitness in Wisconsin, set out to explore high-ticket gym sales instead of the traditional CrossFit membership. He’s now successfully charging $200 a week for his 12-week Health Launch program.

In fact, since the program launched a year ago, more than 50 people have completed Health Launch. Participants then move into a 14-week, intermediate program involving personal training. Finally, they graduate into the regular CrossFit group classes.

Through his years as a gym owner, Yule realized that CrossFit is intimidating to a lot of people.

“Oh my God, that’s way too much for me,” he said of how many people in his community react to the thought of starting CrossFit. So he created a plan that would ease people into CrossFit slowly, starting with a gym rebrand.

In 2020, he changed the name from Harbor Park CrossFit to Harbor Park Health and Fitness. And while he’s still a CrossFit affiliate today, he also offers bootcamp-style classes, personal training, pilates, yoga and mobility classes.

Further, Yule recognized that a large percentage of the Wisconsin population is generally unhealthy. So asking them to start working out three days a week could be too much for some people.

“We’re in a community that’s very unhealthy,” said Yule. “It’s pretty much drink beer and eat fried food. It’s what people do.” Thus, obesity is a huge problem. When he was just offering CrossFit to the masses, he wasn’t able to provide a solution for this demographic.

Further, Yule took a hard look at his client churn numbers. He realized that most people would come in “and be consistent for two, three, maybe four months and then they would just disappear.”

He believed that people would come in with an expectation that they’d lose weight, but CrossFit isn’t specifically designed for weight loss. They would fall off and quit when their expectations weren’t met.

And so, Yule created Health Launch. Designed specifically for those looking to lose weight, the program was Yule’s first foray into high-ticket gym sales, and involved some trial and error. It began as a 16-week program but Yule found 16 weeks was just too long. He turned it into a 10-week program, and finally found a sweet spot at 12 weeks.

“These people don't need more workouts. They need to understand how to eat right and to manage stress,” Yule said.

Health Launch starts with an in-person consultation, then Yule rolls out their step-by-step program via the TrueCoach app. From there, people begin with a three-week reset, where clients cut out processed foods. After that, they begin working on building healthy nutrition habits, before digging into stress management and improving sleep.

As for the fitness component, it looks different for each person depending on their wants, needs and goals. For some, it means coming to the gym twice a week—some of whom focus only on Pilates or yoga to start. For others, it means going for a 30-minute walk every day or working on an individually-designed program at home.

At the start of the 12 weeks, Yule estimates only 10 to 20 percent of participants start coming to the gym. But the focus for the large majority is on laying down new habits that will soon support an exercise routine. No matter what though, everyone is at least going for walks, he explained.

During the back half of the 12 weeks, when people are feeling less stressed and more physically capable, most come to the gym twice a week. The eventual goal with everyone is to graduate them into CrossFit group classes.

With more than 50 “graduates” in the past year, Yule considers Health Launch a high-ticket gym sales success thus far. He cites five reasons for the program’s success:

1. “A tangible program with tangible results.”

Yule believes Health Launch successfully attracts new clients because it’s so specific. Unlike selling a $150 gym membership, which is “open ended,” Health Launch speaks to a specific demographic with a specific goal.

“It’s a tangible program with tangible results,” he said. “Specifically, the program is intended for people who want to lose 15 or more pounds, so it’s a weight loss program. But when we sell it, we sell it (as) we’re changing your health habits. We’re setting you up for what you need to maintain long-term health and wellness.”

2. An Achievable Program That Meets People Where They’re At.

No matter how much the affiliate owner wants people to be ready for CrossFit, lots of people just aren’t, and Yule recognized that.

The Health Launch program meets people where they’re at and offers a bite-sized approach to change. It isn’t as overwhelming as asking a person to go from doing no exercise to working out three days a week in a gym. As a result, people are willing to sign up because they can see that it’s doable, Yule explained.

“My personal message now is you don’t need a crazy workout regimen and a strict diet regimen. And I think that is impactful, considering my community,” he said.

Similarly, the program looks different for each person. While some start with walking, others start with yoga, and some are ready to join CrossFit right away. Yule also explained that some people need to meet with him more frequently in person, while others are happy communicating on the TrueCoach app. But the overarching idea is to provide the person exactly what they need to be successful.

“It’s 100 percent custom for whatever they need. It has to be custom to them and their situation,” he said.

Yule is convinced that this high-ticket gym sales approach has brought on some clients that he never would have been able to sell in his former system.

For example, a woman he consulted with recently commented, “I just really thought you were going to make me workout every day.” But when she discovered that he was more interested in designing a long-term plan for all aspects of her health, she signed up immediately.

3. Participants Have Skin In The Game.

Simply put, because people are paying as much as they are for the program, Yule thinks they’re more likely to comply. They have skin in the game. When they follow the Health Launch plan, they see results, which is the biggest factor for gym member retention. In other words, money is a great motivator.

“For a lot of them, this is a significant amount of money, so they do everything that (we ask). And we lay it all out for them, so they just follow along,” he said.

Having PushPress software in his corner has made a huge difference in Yule’s ability to bring on new clients, and to make changes in the program as needed.

“We have changed our programs a lot this year because they evolve, so making new plans and getting them set up. And we changed our billing from monthly to every four weeks, so all that kind of stuff would have been hard without PushPress,” he said.

Yule added that the software he used before PushPress felt like he had to take “100 steps” to make one small change. Ultimately, this last year “would have been a headache” without PushPress. “We wouldn’t have been able to do what we did with a different system.”

Pro Tip: Find out how PushPress can save you time and help YOUR gym thrive! Book a demo with our team today for more info!

5. The Right Message For The Target Audience.

Yule also credits his marketing efforts in attracting his target audience, speaking to their pain points and providing a solution. He mainly uses Facebook ads for gym marketing and his local news channels to spread the word.

Because of this, Yule said he was surprised at how easy high-ticket gym sales have been, in comparison to what he used to offer. In fact, it has been even easier to sell Health Launch than when he used to try to sell a CrossFit gym membership for $150 a month, he said.

In Summary: High-Ticket Gym Sales By The Numbers

“We’re literally starting from ground zero, building these habits to support a long-term exercise program. So the way I look at it is we’re manufacturing those habits with intention for that long-term member,” Yule said.

He added, “I don’t see a cap. This just seems like this can keep growing and growing.”

The Price Is Right: How To Set Your Gym Membership Pricing

Setting your gym membership pricing is one of the most important steps for financial success. Here's what to consider when getting started!

Gym member check-ins provide beneficial data that can help you predict and plan your business! Here are seven reasons you should be checking members in.